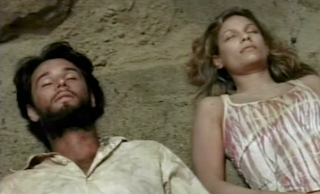 I really liked last night's episode of LOST. It was good so see a cool mystery slowing unwind while they weaved in events from the past two and a half seasons. The whole time I was planning on hating the episode. How can people flashback when they are dead? I was going to call shenanigans on the show and possible claim it jumped the shark. Of course at the end they hit me with a twist that makes it all better: they weren't really dead. Well now they probably are after being buried alive under 3-4 feet of dirt. They would surely suffocate before regaining the strength to dig out. But this is a strange island so who knows. Paulo and Nikki acted with the same level of secrecy and distrust as the rest of the survivors. They didn't tell anyone about the beachcraft, the Pearl, Ben and Juliet, or the walkie. Also, the first flashback scene with Billy Dee Williams was possibly the funniest scene on the show so far.
Here's what we know:
New Questions:
I guess there weren't really many new questions. Congrats to LOST for making their first really self contained episode. Bye-bye Nikki and Paulo.

Comments:
I think this episode may have been an homage to Alfred Hitchcock. The cold chills when you realize they may not be dead leading the flash back of her saying, "paralyzed" and finally the climax of her eyes opening right as the dirt fell on them.

It's pure Hitchcock, and maybe a little Rod Serling thrown in for good measure.