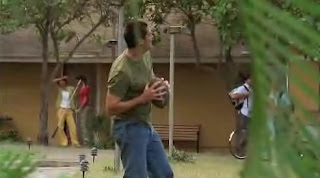 If you count two hour episodes as two, seasons one and two of LOST each had 24 episodes. The current season is set to have 22, but they might end with a double episode. I don't know why they would cut production down this season, but they might. Assuming 24 episodes in the now announced/rumored total five year plan, that would put 3.12 "Par Avion" at the exact half-way point of the series. We're living on a prayer.
On to the episode... Farewell Patchy. We barely got to know you. Who knew the others had a sonic weapon fence? This season is inching along with "the Others" storyline. The thing LOST knows how to do is end an episode. Charlie's going to die! Deleen, we found Alex! The Flame goes up in flames! Jack spikes a football! Well, the last one doesn't seem that ground breaking although it was probably the most unexpected ending this season. Jack tossing a ball around with Mr. Friendly? What the pho? P.S. I hate Claire. She turned around at the end but she was unnecessarily harsh on Charlie and Desmond, unless they cut out some scenes that made her outrage more clear. I'm so sick of her saying "stay away from me and my baby!" And her not even wanting to know her father's name was a real cop-out. The Others are sure to know this information anyway. So why is Jack so chummy with Mr. Friendly? Here's my theory: mind control. All these people are ready to die to protect the "others". Jack and the Stewardess seem to have flipped to the dark side super quick. In my opinion, the only way anyone can switch sides that quickly is through some sort of mind control. I like football playing Jack, much less of a dick.
Here's what we learned:

This week we find out how Lock got in a wheelchair.