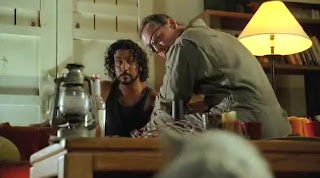 I was a big procrastinator this week. At last here is last week LOST report. I usually don't like Sayid episodes but this one was good. This was probably the most revealing episode of the season so far. We now know that the "Others" or the "hostiles" are not part of the Darhma Initiative. We knew previously that the Darhma Initiative still exists because of the food drop. We know also that the "Others" have contact with the outside and a recruitment program. Which means there are at least two outside organizations with operations on this island. Which leads to the biggest question: what's so important about this island? I was also happy to have a second episode in a row without Jack. He's a dick.

Here's the dialog in Russian:

Tonight is a Claire episode. The preview suggested a surprise connection between two of the survivors. If it's that Claire is Jack's sister, that's really not a surprise. Everyone assumed that after the Ana Lucia episode.