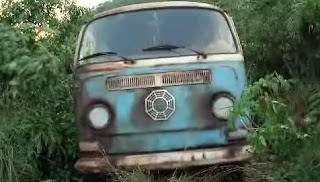 I loved last night's episode. It's the episode I've been waiting for since the season premier of the second season when Hurley told Jack Mr. Clucks was hit by a meteorite. That was cool. This was the funniest episode of the season by far. I think we have covered everything about Hurley's past now. The only other flashback they could do is the story of his best friend running off with his girlfriend, but I don't need to see that. I love the reporter, Tricia Tanaka. She is probably based on long time L.A. Asian reported Tritia Toyota from channel 2 in L.A. in the 80's and 90's. She was the only Asian on TV when I was little. Did you notice the brief appearance of the useless twins. I don't even remember their names anymore. I'm always happen when Delenn comes back. She's listed in the next two episodes.

Comments:
Why didn't they finish the road and even more so, why didn't they find a bury Roger? He dies and they just leave him? It was a better episode than usual. I found the asian guy to be very vulnerable and cute in this episode, which was a nice change from his usual angry side.