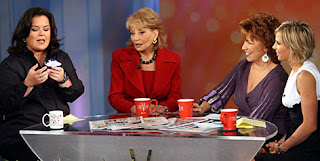 Elisabeth Hasselbeck is one of the hosts of The View along with Rosie O'Donnell, stand-up comic Joy Behar and of course Barbara Wawa. She's the conservative voice on the show. Most of the time she just spouts Bush talking points but yesterday she went over the top. Here are some of her quotes from the 3-15-07 episode where they were discussing the recent confessions of Khalid Sheikh Mohammad.

"I think the interrogation process is what we need."

"They should be put under pressure to where they confess things."

and my favorite that still makes my blood boil:
"If he [Khalid Sheikh Mohammad] is admitting to this stuff he should be tortured now for having a hand in 9/11."
So not only does she support torture as part of the interrogation process, she supports torture as a punishment. She is truly a despicable person.

When Rosie asked "So you believe in torture?" and EH did not answer and changed the subject.

Joy questioned whether torture was even effective.
Joy: "John McCain says torture doesn't work."
EH: "It doesn't all the time."

The EH quoted a study undermining torture: "They have done studies with criminals that criminals are more likely to say that they have committed a crime if they are treated with respect." So EH knows the studies and accounts saying torture is ineffective and yet she still supports it. People like her should not be allowed to breed.

Let me say that I personally believe no one should ever be tortured for any reason ever. I equate torture to rape as the two things that are true signs of evil. When the Abu Ghraib stories came out, I was appalled. My nation had suddenly become the bad guy. We were the Nazis or Imperial Japanese who were so sure of our superiority that we stopped viewing others as humans. I know that history will not be kind to us who let this happen.

Then she went on to defend the fact that none of the Guantanamo Bay prisoner has a lawyer.
"Why don't we give them milk and cookies, and a lawyer, and let him watch American Idol..."
I think this attitude comes from her highly privileged life. She's probably thinking everyday, "Why doesn't everyone go on Survivor, marry a professional football player, and get a national talk show. I did that." And they should all eat cake too. We need to treat others fairly if we expect to be treated fairly.

I'll finish with a quote she said a couple times: "I don't care to be liked." Mission accomplished.

Comments:
Elisabeth Hasselbeck has long been delusional. She's like the "love-child" of Dennis Prager and Ann Coulter – SCARY. You have a wonderful blog, Daniel. I'll probably be linking you at mine.