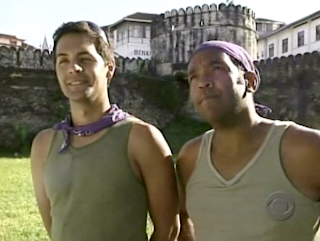 The last two seasons of The Amazing Race were obviously rigged to keep the favorite teams in the game. Last year, the Hippies got every break. In the fall, the West Virginia coal miners kept getting "non-eliminated". I got my faith back this season when Rob and Amber, the most popular team in the history of the show, were eliminated in Argentina. Hooray! I'm so pleased. They were both jerks. I was also overjoyed to the Terri and Ian get the boot. Recently, Mirna and Shmirna have taken first place. The new issue we haven't seen since season one is a huge difference in time. Thanks to the efficient African air service, the last team is over 12 hours behind the first team. This means Mirna and Shmirna left the pitstop before Team Guido arrived. Here's were they rank.
I don't know how Team Guido can pull out of their huge time debt. This Sunday there are running two episodes back to back. I'm thinking the first will be the non-pitstop, pitstop.