Syler? Where have I seen him before 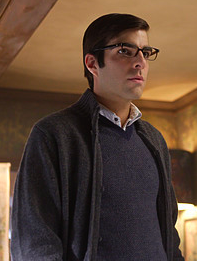 On Heroes last night we were finally introduced to Syler, the serial killer who some of the heroes have been looking for since the second episode. We also know a bit about why he is killing people: to steal their powers. But from when I first saw him, he looked familar. About half way through the episode I remembered he played Tori's gay friend from VH1's So NoTORIous. Although this made me sad since it's more evidence there won't be a second season. I love that they made him look not unlike Clark Kent at the beginning, before all the murder and brain stealing, that is.

Comments:
Don't forget that he was a bitchy CTU agent on "24" season 3.
They have some pretty hot pics of Zachary Quinto on IMDB.