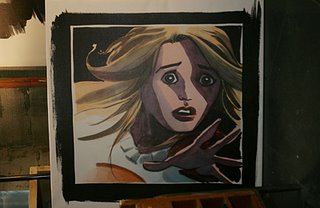 Heroes is my favorite new show of the fall. It's got a big sweeping story and great character development, kind of like LOST. It's not as brilliantly structured as LOST, but it's still very well done. Some of the mutants are starting to meet up and figure out their destiny. There's still a great number of mysteries.

The show is doing very well. NBC has picked it up for a full season and is negociating additional episodes. A standard season is 22 episodes. Shows that do well are given extended season of 24 episodes. LOST and Desperate Housewives have each had 24 episodes in both of their seasons. This costs the network more money, but they get better ad revenue then with repeats or other shows. Back when The Simpsons was Fox's only hit show, they tried to pull as many new episodes of the creators as possible, and so we got the clip-shows. It was sad.

Unfortunately, Studio 60 on the Sunset Strip isn't doing as well as everyone expected. The show keeps only about half the viewers from Heroes. It's like I predicted, no one cares about the behind the scenes of Hollywood.