The Good, The Bad, and the Veronica 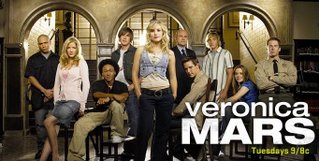 Overall I've been disappointed with this season of Veronica Mars. Last night's Fall Finale started off with the worst of modern TV conventions: starting the show near the end of the story and then going back, in this case, "Two Days Earlier". I hate when shows do that and yet I completely understand. Mostly it's just lazy story telling but in this case I think they wanted a strong start for viewers who were hanging on from Gilmore Girls, which gets 75% higher ratings. So I can excuse this on shows which are not already very strong, but if I see that again on Battlestar, I'm going to hurl.

Back to VM. I've been confused and frustrated by this season, although last night cleared up lots of the questions. It was a very strong episode, better for its cliffhanger-ness than either of the season finales. We were gifted with the resolution of the rape story line and Dean Sitwell was murdered. Murder, most foul. Here's my good and bad list for the first nine episodes of the season (which is only having 20 episodes, BTW).

The Good:
Ed Bagley Jr.: He's plays the recently deceased Dean of Hearst College. He started out at odds with VM, but she quickly became her go-to girl. This was of course his undoing since Veronica cannot be friends with "The Man". Rest assured the new dean will not be her best friend.

Professor Landry: He's Veronica's ciminology professor and he's hot! Unfortunately he's one of the suspects in the Dean's murder since he was screwing the Dean's wife. He had just giving the assignment "Plan a Perfect Murder." He's too obvious.

The Bad:
Dark storylines:The rape story has been really heavy and hard to watch. I'm glad it's over and we can get on to a cheery murder investigation.

Not enough Mac: She was in last night's episode but I saw more of her in Napoleon Dynomite which I watched on Thanksgiving than I've seen her recently in VM.

Hearst College? Why not Hearst University? It's big. It's prestigious. It's got history, powerful alumni, Greeks, and ROTC. It should be a university.

Judgmental Veronica: Why is she so morally superior this season? She judges her dad for sleeping with a married women. She judges Logan for being himself. She freaks out at her bodyguard. Let's try to be more tolerant.

Parker: Didn't she leave? Why was she so mad at Veronica all season? I just don't understand this character.

Logan's Penthouse: There's no reason he should be still living in the Penthouse at the Neptune Grand. Buy a condo near campus. It's just stupid.

Wallace: He's been useless this season. What was with the cheating storyline? That went nowhere. If you can't get through your freshmen classes, it's time to change your major.

Comments:
I love how everyone knows "The Dean" in TV shows where people go to college. Like the dean has nothing to do but hang out with students and chat. I did the five year plan and I have no idea who the dean was, although I think there was more than one. All I remember was the president, William Gerberding, or "The Gerb" as he was called (against his will.) The newspaper used to have a "Gerb Watch" where you could report "Gerb sightings" although they rarely happened. And that was the whole joke. Nobody knows or even sees these people!

Oh, and also, not everyone works for the frickin' college newspaper! </rant>

I know. I met the Dean of my school once. She had a perposterousely oversized office. It was the School of Engineering and Computer Science or SECS, pronounced SEX. Surprising, there were not many jokes about that. Perhaps nerds are uncomfortable with sex jokes. But we too had a University President. The one I met a couple times was Glinda. We called her the Good Witch.