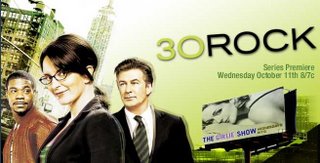 Tonight is all about numbers, but not Numb3rs. I don't watch that show. Tonight is the debut of 30 Rock on NBC. This is Tina Fey's new sitcom about an SNL type show. Studio 60 isn't doing so well and, as I keep saying, probably won't last out the season. Tina Fey is a great comedy writer and if she's involved in the show, it's going to be funny. It also stars Alec Baldwin who showed of his comedic talents with a recurring role on Will & Grace during its final season. Tracy Morgan also co-stars. I don't know who else is in the cast but I hope it's big. Ensemble shows are in this year. Last week they had the best week ever.

After 30 comes 20, Good Years that is. The new Jeffrey Tambor and John Lithgow sitcom is like the Golden Girls meets the Odd Couple. I looks kind of traditional sit-com-y, but with those two stars on the cast, it's going to be funny.

Finally at 10 on ABC is episode 2 of The Nine. I haven't yet watched last week so I'll watch them both tonight. A good friend of DanielsTVBlog gave this show a good review. He said it was a much better premise than he thought it was going to be. I can't wait to get caught up.