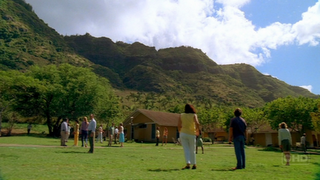 What a great starting to season 3 last night. This show continues to deliver. I did find it interesting that most of the story was from Juliet's point of view but the flashbacks were Jack's. We've seen where the courageous three have gone but we still haven't seen what is going on with the beach camp, Hurley, the sailboaters, or Miss Widmore. I loved that season three opened with a close up of an eye just like the first two seasons. Whose eye it was is also significant. Season one opened on Jack's eye and it was all about the survivors. Season two opened on Desmond's eye and it was all about the hatch. Season three opened on Juliet's eye so it should be all about the others. Here's what we've learned:
New questions:

Comments:
I found the three of them (Jack, Kate, and Sawyer) to be interesting choices because they are all obsessed and as of last night, in my opinion, stupid.

Jack's in the cell pulling on that stupid chain like that's going to get him somewhere. Sawyer is focused on getting some stupid cracker from his cage, and Kate won't even talk to anyone practically.

Did it ever occur to any of them to say, "Hey, where are we?" "You know this was all an accident, is there any way we can go home?" "Can you tell me what's going on exactly? I'm uncertain as to why we even have a conflict."

But no Jack, just keep pulling on that chain and not eating. That's what's going to get you somewhere.

Nobody on this show seems to ask questions about their situations. Ben (as Henry Gale) made a comment that no one seems interested in questioning the stuff in the hatch. I would have been all over that hatch, checking out the technology and making lists and notes and stuff.

The thing about all our main characters is no one really wants to go home. Jack's life is crappy, Kate's going to jail, and Sawyer doesn't really have anything either. They all seem to just be in some basic instictual mode of wanting to be free.

At least we know where the polar bear probably came from: Sawyer's cage.