Battlestar, it's good but is it enjoyable 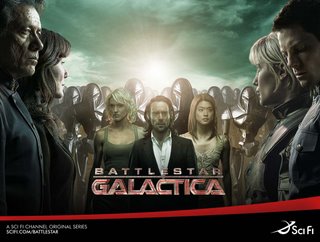 Battlestar season 3 started last week. It's easily some of the best television every produced. Critics love it. Everyone gushes about it. I love it. But it isn't the most enjoyable show to watch. Currently most of humanity is in a big concentration camp. We start to sympathize with suicide bombers. I was hoping Starbuck was going to kill a toddler. What has happened to television? Still, it's a great show and the character will be out of their crappy situation after a few more weeks and back in space. I hope they give them some good things after they escape from New Caprica.

Comments:
I just have to post about The Nine. I decided it was a crappy show in the middle of this weeks episode. When the guy threatened to convict some of the hostages of crimes if the cop guy didn't back down on his exposure of what was apparently a botched negotiation. Anyway, it was at that point I realized this show may have some sort of a secret, but I couldn't imagine it could be anything interesting. If it turns out to be aliens or something let me know. But if things go as I expect, this will be a one season show at most. To reiterate, they keep trying to make it out like there's some big mystery, but it just doesn't seem that interesting.

I'm loving the new season so far. I forgot to say thank you for the card after the Lego convention. It was good to see you there. We should catch up soon.