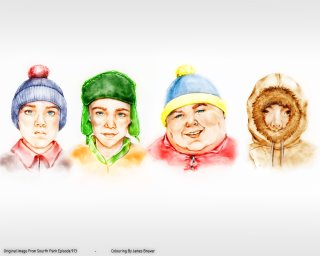 The Epic 10th season of South Park starts on 10/4. The same night at LOST, BTW. Starting Sunday they are running the 10 most influential episodes of South Park one each night running up to the season premier. Of course on Sunday they will be airing Trapped in the Closet, the episode that got Tom Cruise bent out of shape by implying he was gay and exposing Scientology for the crack-pot fake religion that it. Incidentally, the Scientology mission in Redmond near Microsoft recently went out of business and if now a pawn shop. I love it. Anyway, here is the full list:

9/24 - Trapped in the Closet.
9/25 - Cartman Gets and Anal Probe - the first episode!
9/26 - It Hits the Fan - They say "shit" on TV!
9/27 - Best Friends Forever - Kenny is in a persistive vegetative state. This aired originally two days before Terry Shivo died.
9/28 - Timmy 2000 - Timmy has ADD
9/29 - Cartman's Mom is Still a Dirty Slut - the second season premier which solved nothing from the cliffhanger
9/30 - South Park is Gay - Crab People, Crab People. Taste like crab, talk like people.
10/1 - The Passion of the Jew - Mel Gibson goes insane, years before it actually happened.
10/2 - Red Hot Catholic Love - What are we going to do about all these boys talking about priests abusing them?
10/3 - The Return of Chef - Chef joins the Super Adventurers Club.