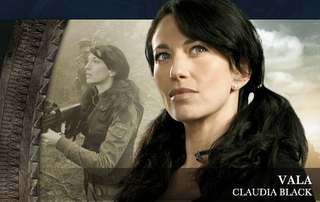 OK, so now we have to wait for January for the conclusion to both these storylines. I like both, but Atlantis had a much better finale. I love SG1's quest story, especially how they kept picking up additions to their quest. But if Inara wasn't supposed to use her power, why was she able to use her strength to open the grate? Was it a real dragon, or a hologram, or Mecha-Streisand? Great story even if we predicted almost everything before it happened. When will Mitchell take his shirt off all ready? Over on Atlantis they had a grear story of loss and moving on. Everyone returned to Earth and started a new life. When Atlantis was threatened again, I thought they jumped to quickly into disobeying orders. It would have been more believable to work within the system. Do standing order from Gen. MacGyver still count if he is presumed dead? Not likely. And the whole trans-galactic gate system is a little fishy to me. The gates work on a coordinate system. Two symbols for each dimension in space and the origin symbol. The symbols on both the Milkey Way and Pegasus gate systems are specific to that galaxy. If they were outside galaxy, how they they have coordinates in three dimensions? I think that was a serious goof-up. And I'm soooooooo tired of replicators. They were lame in season three of SG1. Do we really need another machine species whose goal is to exterminate mankind? I'm glad the ancients got their come-up-ance. Arrogant super-intelligent races are always doomed, just like the Furlings.

BTW, I absolutely love Vala. (A) She wears that crazy eye mask while she sleeps. (B) She brought a hair dryer on the mission. Where was she going to plug that in?