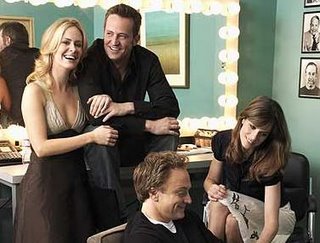 So any new procedural show is just off the list. These people looked at an overblotted landscape of cop and lawyer shows and said "Me too!" There are other shows I won't be watching and here is why:

'Til Death - This is the show that makes me happy I'm gay. The entire joke is about how crappy it is to be married for a long time. My parents are happy. I love Jolie Fisher, though.
Men in Trees - Anne Heche is crazy and this terrible rip off of Northern Exposure is sure to be the first show cancelled. I wonder if ABC picked this up just so they would have something to cancel.