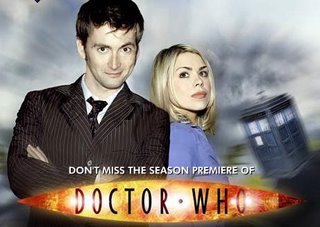 Season 2 of the current incarnation of Doctor Who starts tonight on the SciFi Channel. This aired on the BBC earlier this year. At the end of Season 1, the doctor died and was reborn in a new body, which happens from time to time when they need a new actor. I loved the previous doctor but the new one is really cute. Tonight they embark on a new futurist adventure called "New Earth" where it looks like they encounter the evil Casandra who tried to kill them when the Earth died in season 1.