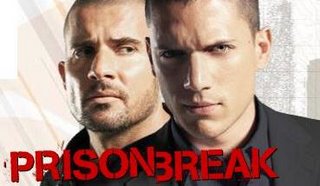 FOX gets a jump on the fall season with the return of Prison Break and the debut of Vanished. FOX often starts early so it can generate early viewership but mostly so it can get some shows up and running before shutting down for MLB in October. I find it funny that the first show of the season, Prison Break, was the last show I watched last season. I had sandbagged the show on my TiVo last season and watched it in June. There's just too much TV to watch. I found the finale to be a little weak. I cannot see how the escapees could possibly outrun the dozens of cops with trucks, choppers, and dogs. They only had a few hundred yards on them, plus they've been running all night. I'm excited about the new FBI guy who joins the show this fall. Last year he played Sheriff Guy on Invasion. Following that is the premier of Vanished. It's about the disappearance of the wife of a US Senator. From what I've read it's more than just a simple kidnapping. I'm looking forward to this one.

Comments:
hi how's it going? i just came here from your MSN Space. I would love for a guy like you to visit my space. It seems you know a lot about TV. And that's what my space is pretty much about. Especially with the Fall Season Starting up. I just put up a blog about Prison Break's premiere. And I have written a review on the yet to be aired Heroes. I'd like someone like you to come and join in on the discussions. If you feel like you'd like to here's the address.