What I've learned from Treasure Hunters: No Fatties 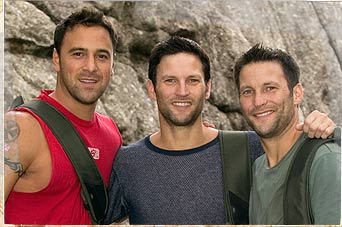 Treasure Hunters is no Amazing Race. It's still a fun show for the summer. I'm sure I would have dropped this during the regular season. On the most recent episode one thing became clear: fat people are useless. First the Brown family ran into problems when the much overweight Keith got stuck in the swamp and tore a leg muscle trying to break free. He was last seen leaving in an ambulance. The game for him is over and the other two will have to continue on without him. Meanwhile Team Geniuses were bickering over Sam's asthma and general poor health, translation: he's out of shape. Francis and Charles are presented with an opportunity to ditch Sam and drop him from the rest of the game. I think they should do it. The show ended with them still pondering the decision.

BTW, I'm pulling for the Southie Boys. Yes, the Air Force guys are certainly hot, but the Southies are a mortgage broker and twin firefighters. It's the thing fantasies are made from. That's the straight fantasy equivalent of twin stewardesses. I hope they win.