The Gates are back... 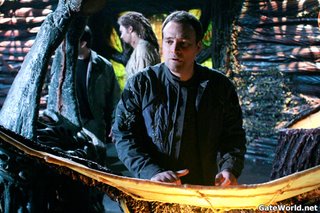 The special effects on the Stargate shows are just looking better and better. There were some really cool space battles on both shows. The rapidly aging child story is so lame but still effective. It was done on V, the 4400, and Angel. I think I was happiest with the Atlantis premier. On both shows they got their butts kicked but the Atlantis team managed to pull a win together. We also got an explanation of why it took the Wraith so long to get to Atlantis last year. So now, what will they do with the humanized Wraith? What should one do with a colony of amnesiatic men (female Wraith were not effected)? Wow, that sounds hot, where is that planet?