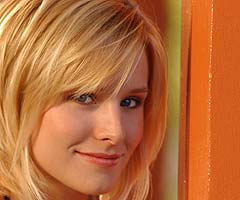 Only two episodes left in the year's biggest mystery, or so the voice over keeps telling us. The thing I love about this show is the way they weave the big mystery of "who killed a bus load of kids" into the individual mysteries each week. She's graduating from Neptune high but will she go to Stanford? Don't count on it. (I don't know why anyone would want to go a Stanford anyway). She's going to stick about Neptune and go to the fictional Hearst College with Wallace, George Michael, and Maeby. They've already started one of next season mysteries, the shaving rapist.

Tonight: Kuzak's trial finishes up. Will he get off? He's a celebrity, of course he will. What does Woody have in store for Keith? Woody is my choice for this year's villain.

Comments:
I do so love me some VM! My favorite show at the moment. Wish that the networked hadn't screwed with the airing of the epi's. It has made it a little hard to follow the intricate plot. But I am completely in. Clearly, Aaron paid Kendelia to get the hair out of Duncan's shower and put it on the Oscar statue. Woody is creeptastic. Lucky - got bailed out by Meg's dad. Duncan got the clap from Meg. Did Meg get it from Lucky? Her father? Still clueless about who blew up the bus, but Woody seems likely to me. He's got some big secrets.

Like your new blog. Now give me some google juice.