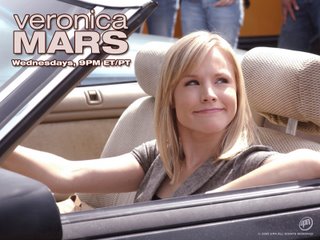 Last night was the last episode of Veronica Mars second season. We had lots of guest stars, the death of three characters, and an arrest of another. The thing I always notice about VM is how long the intro segments are before the starting kicks in. Most shows have just one or two scenes to set up the episodes, but not Veronica. Last night had a lengthy dream sequence with Lilly, Duncan, and her mom making appearances. We then got to find out the bus was crashed by Cassidy (don't call him Beaver) Cassablancas who has been a badder boy than we ever realized. He's dead now. I'm still confused about he and his brother Dick ages. I always thought Dick was a senior and Beaver was a junior, but Dick wasn't with the other seniors at graduation. Are they twins or something? Anyway Kuzak found out the hard way that a celebrity will get you out of jail for murder but won't keep you from being murdered yourself by the henchman for the dead girls incredibly wealthy family. Don't mess with the super rich. Death #3 was Woody when his plane blew up right over Neptune. I knew that Keith couldn't die. And it looks like Logan and Veronica might be on their way back to being a functional couple again. Good episode with a week cliffhanger. I don't really care. VM does the season long mystery so well we don't need a big surprise ending. Here's what we were left with:

Comments:
Did you catch the call from Duncan to Clarence Weidman?

Clarence: CW
Duncan: Is it done?

What a funny shout out to the new network, who better damn well renew this show.

I was imminently satisfied with the resolution, though I will be sad to see Harry Hamlin go. Aaron was loathable, but fun! And the Logan/Veronica scenes were wonderful. Beaver was bad, bad,bad. Couldn't really care less about Jackie, but I do love me some Mac. Woody was also a captivating, if vile character. Though the mid-season writing was a little sloppy, and though UPN kept screwing with the schedule, and though the plot lines were a little complicated this year, I still love this show, and am counting on renewal.

How cute was CC's hair in the final scene!