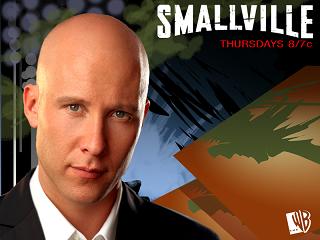 In my opinion, Smallville jumped the shark when Lana became a Kryptonite vampire earlier this season. How does one make a full recovery from being undead? For my friend Sean, it was when Krypto the Superdog showed up. According to www.JumpedTheShark.com, the show never jumped. Really? Who voted for that? Anyway, the fifth season of Superboy has been peculiar. It started well with the creation of the Fortress of Solitude but the rest of the season has been week. The thing that's gotten worse this season than any other is the travel time between Metropolis and Smallville. I think the writers have stopped caring about the fact that the two locations are supposed to be three to four hours apart. Would you drive from Seattle to Portland for a five minute conversation? It's retarded.

The rest of the season is going to be about stopping the Spikes from destroying the human race for still as of yet undisclosed motives.