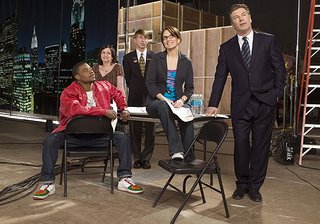 Yesterday NBC released its fall schedule. Surface is gone. Boo! Scrubs is back. Yay! But not until midseason. Boo! And for some strange reason they have TWO shows about the behind the scenes happenings at a SNL type skit comedy show. I can understand two such shows debuting in the same season, but on the same network? That's retarded. I'll watch the Tina Fey show.

Last season we had three rounds of The Apprentice but next season we are down to only one. The Donald doesn't get his show on until January and he will be up against Desperate Housewives. Could this be the last season?

Anyway, here are the new shows: