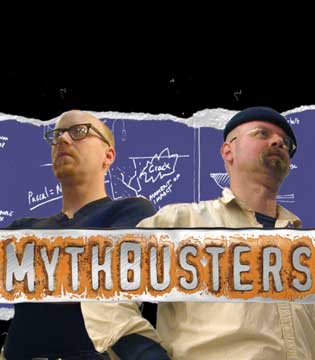 I first heard of MythBusters last Christmastime when I was listening to local radio while visiting my parents in L.A. The MythBusters, Jamie Hyneman and Adam Savage, were being interviewed about the jetpack episode. It was an old interview since no one listens to the radio the week after Christmas. I grabbed a couple episodes on my TiVo and took a look. I was hooked rather quickly. My favorite moment to date was in the Shark Week episode. They were testing mostly myths from the movie Jaws including "does a scuba tank explode when shot" and "can a shark ram a hole in a boat" and "if you punch a shark on the nose it will leave you alone for a moment." On the later they needed to create a way to punch a shark without putting someone in a very dangerous situation so they made a shark punching machine. But first they needed to make some fist molds. Rather than just pouring plaster over someone's hand and arm, Jamie went to a sex shop in San Francisco and bought a couple "novelty fists." One was shaped like a traditional fist but the other was what I call the gay fist which is more of a jab, with fingers extended. Punching sharks wasn't quite was this was designed for. I laughed my ass off.