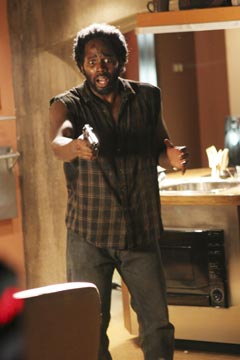 Holy Crap that was a good episode last night. Michael didn't do much until the end, but then he really ended the show with a bang. I was completely caught off guard by Anna Lucia getting shot and then when Libby walked in, it was a total JOTT moment. It's not completely clear the outcome, but here's what I think: Anna Lucia is dead. Libby is just hurt, maybe no even shot. What was she holding? Maybe it just knocked her down. They only announced "She's dead" once in the upcoming episode preview. Henry took her with him after Michael shot himself in the arm. Plus we got to see a shirtless Sawyer.

OK, now here is what we learned:

Here is what is still unanswered:

Also, my theory that someone says the word "lost" in each episode held last night. Both Hurley and Libby said it.