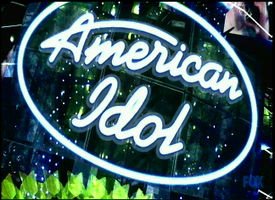 First off, if you ever are looking for anything on the internet, just go to Wikipedia first. That's where I always find whatever I'm looking for. I looked back at the #1 shows throughout the short life of television. In the 50's there was Lucy. The 60's were all about Bonanza and The Beverly Hillbillies. The 70's were dominated by All in the Family. In the 80's Dallas and Dynasty gave way to Cosby. The 90's started off with 60 minutes but finished with Seinfeld and ER. This historical list is dominated by dramas and sit-coms with a sprinkling of variety shows, games shows, and news shows. If anyone told me 20 years ago, 10 years ago, or even 5 years ago that the number #1 show for two years running (with no sign of stopping) was going to be a bunch of young people singing karaoke, I would have said, "No flippin' way!" But that's the way our country is these days. Tonight is the finale of the fifth incarnation of American Idol, the most popular talent show ever. I have better things to do than watch people sing the songs that made other people famous so I'll be watching the finale of LOST. I think Charlie is going to die.