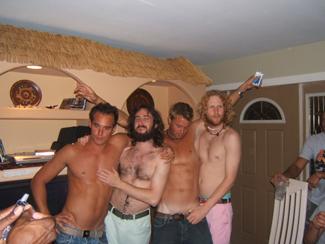 Was it a coincidence that the episode of South Park that was shown immediately after the Amazing Race was "Die Hippie, Die" the one where Cartman becomes an exterminator for the growing hippie problem? Was it a coincidence or did they know the Hippies were going to win the race or at least make it to the last leg? I was disappointed to see all the hard work of Eric and Jeremy fall apart at the last minute because they didn't know how to order the flags of the countries they visited. Too bad. Did the Hippies happen to hit both non-elimination rounds in last place or did the producers rig the show to keep the flamboyant team in the game? We may never know. At least the #1 and #2 teams are still friends as scene in the post race party photo.