The Daily Show and Colbert Report 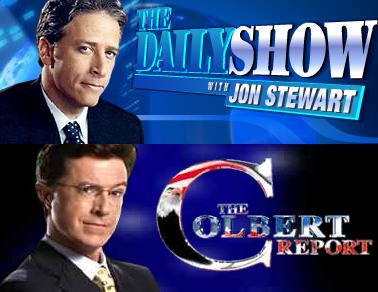 Other than the occasional news website, I get all my news from Comedy Central. It's sad when all the "real" news outlets are too afraid to report the truth. Luckily we have The Daily Show and The Colbert Report (the "t" is silent because it's French, bitch!). With a level of sarcasm they can actually criticize the current administration. The Daily Show has been around for a while and has a great format. The Colbert Report sprang up last year like a mature comic flower. Colbert has The Wørd (with the argumentativee bullet points), the never ending segment, "Better Know a District," Tip of the Hat/Wag of the Finger, All You Need to Know, On Notice/Dead to Me, Formidable Opponent, and The Threat Down (Bears!). Plus there are the greatrecurringg jokes such as his book "Alpha Squad 7: Lady Nocturne: A Tek Jansen Adventure" which has it's own website, his lost love Charlene, and his nemesiss liberal radio host Russ Lieber. With all this, I can forgive him for leaving the "This Week in God" segment from The Daily Show.