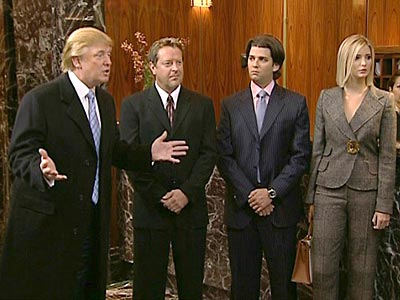 Thank The Donald the Sticker Bitch (Andrea) was fired last week. She was so terrible. She was so condescending. Last week we were also introduced to Donald Jr. and Ivanka. Is Donald getting ready to use them next season in L.A.? He can’t very well use Carolyn and George, they have businesses to run in the NY area. I have to give them big thumbs down for their first performance. Ivanka was either to nice or super bitchy, but that was probably the editing. DJr was just pointless. Good job kids! Really? No, not really.

Comments:
Oh my gosh, this blog looks so much better than your msn blog, I love it! The pictures are actually big enough to be seen!

Anyhoo, I kind of liked the woman who got fired because she reminded me of our friend Christine, except Christine is nicer. But they look very similar.

I thought Donald having his son and daughter on the show was so cheesy. Ivanka actually seems to be the more professional of the two.